“He’s doing two very juxtaposed programs, bringing out his artistic sense,” the coach said. “Because he’s a better technician, he can let himself interpret the music more and entertain the crowd. … He’s got a vision. Desire creates the power, and he exudes that.” 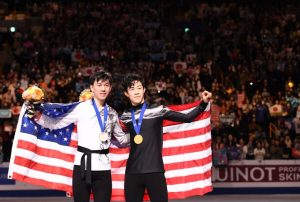 In the weeks leading up to the 2018 U.S. championships in his hometown of San Jose, California, the figure skater pushed his then 17-year-old body to its limits every night in a Colorado Springs Olympic Training Center gym, desperate for one of the three men’s spots at the PyeongChang Games.

“It would be past closing time, and I would still be in there,” he said. “I’d tell myself, ‘This extra repetition is going to be the difference between me making the team and not making the team.’ I had a really rough grand prix season, I thought it was over, it wouldn’t be possible, other guys were more qualified. I was almost blind with hunger to make the team.”

Zhou made it, placing third in San Jose and an impressive sixth in PyeongChang. Since then, his career has taken twists and turns enough for an athlete a decade his senior…

More  on Vincent Zhou at www.teamusa.org

We send out our lovely email newsletter with useful tips and techniques, recent articles and upcoming events. Thousands of readers have signed up already. Get a free WordPress eBook now.
Skater Vincent Zhou