In a teleconference call on Tue., Jan. 8, Vincent Zhou spoke about his preparation for the 2019 U.S. Championships, the work he has been doing to address the full rotation of his jumps, and improving the artistic side of his skating.

Though his back problems are now in the past — which Zhou said was “some sort of muscle injury” — it has not been an easy ride for the 18-year-old California native.

The latter half of 2018 did not get off to a great start. Zhou finished fourth at the International Classic, and fifth at his first Grand Prix, Skate America. A week before he headed to his second event, NHK Trophy, he dislocated his shoulder in a fall on the ice. The injury rendered him unable to prepare for his second event. “That was the cause of me cutting back on technical content in Japan,” Zhou explained. “I dislocated it on a Monday and was not able to train for the entire week. So my first day on the ice was a short private ice session the day of my flight to Japan, and when I got there I just felt really out of it. Honestly, my performances were more than I could have hoped for at the beginning of the previous week.

“After Japan, training was a little bit rough because after going through all that, and coming back starting training right away — it is never an easy process. But, I worked hard on getting myself back into shape and I skated decently in Estonia (where he placed second). After that, I started training really well because I had time to sit down, take a breath and get a fresh start.”

We send out our lovely email newsletter with useful tips and techniques, recent articles and upcoming events. Thousands of readers have signed up already. Get a free WordPress eBook now.
2019 U.S. Championships, Vincent Zhou 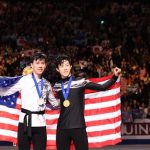