The Use and Abuse of Plyometrics

When Dorothy Hamill skated at the 1976 Olympics, I recall the TV announcer’s extensive praise for her tremendous jumping power. Certainly Hamill’s flawless artistic presentation played a role in her victory but what the announcer was trying to impress upon us was how Hamill had introduced to the sport a level of athleticism that was unprecedented. Dorothy Hamill was a pioneer, an athlete who was unquestionably ahead of her time.

Nowadays, of course, the performance that won Hamill the gold medal at those Olympics would barely place a skater in our least-competitive regional competitions. Triple jumps for women and quad jumps for men have become the competitive standard-and if you don’t have at least a double Axel by your 12th birthday, you might as well forget those Olympic dreams. With such expectations forced upon our athletes, ever-growing numbers of skaters are being encouraged to participate in off-ice conditioning programs. Of all the oft-ice training options skaters have to improve their performance on-ice, the one that has sparked the greatest interest is plyometrics-and with good reason. Plyometrics is considered to be one of the best ways, if not the best way, to improve jumping ability.

Unfortunately, the manner in which this type of training is being implemented in some off-ice conditioning programs may cause more harm than good.

Plyometric jump training, or more appropriately the “shock method” of training, refers to activities characterized by an intense jump that is preceded by a relaxed state. Dropping off a box and landing on two feet and then immediately jumping upward is an example of a true plyometric training exercise. Skipping, hopping and most jumping exercises and medicine ball throws do not fulfill the requirements necessary to be considered true plyometric training exercises.

The person most exercise scientists regard as the father of modern-day plyometrics is Professor Yuri Verkhoshansky, a Russian scientist who developed this training method to improve athletic performance. Dr. Mel Sift, a South African exercise scientist who has worked with Verkhoshansky on several projects, told me that Verkhoshansky is appalled at most of the material being published about plyometrics in this country. He believes our coaches have, quite simply, misinterpreted the original research on this subject.

One reason for this problem in communication is that often the original material published by respected Russian scientists like Verkhoshansky is not translated accurately in the US. Sift says that the Germans, who recognized the value of Russian research, often had entire teams of linguists and scientists working full time to accurately analyze the writings of scientists like Verkhoshansky. In the US, when such material became available, often only a single individual would translate it-and then only as a part-time assignment. One example of poorly translated research is when American coaches recommend that an athlete should be able to squat 1 1/2 times bodyweight before performing plyometrics. Although this is an excellent safety guideline, Russian sports literature presents several specific types of true plyometric exercises that can be performed without possessing such an advanced level of strength. (For those interested in learning more about Verkhoshansky’s work with plyometrics, I recommend Siff and Verkhoshansky’s exercise textbook, SuperTraining.)

The Abuse of Plyometrics

The most common problems I see with U.S. coaches who prescribe plyometric exercises (or, at least, what they think are plyometric exercises) are that they underestimate the intensity level of plyometrics and don’t take into consideration the athlete’s training schedule, work and recreational activities. For example, an intense plyometric training program should not be undertaken if a skater is in a summer program that requires him or her to perform three freestyle sessions a day, five to six days a week, along with ballet and power skating.

Another problem I commonly see is that the plyometric exercises most coaches prescribe to skaters are not biomechanically specific to their skating jumps-and as such often have little carryover to skating performance. For example, all legal jumps in figure skating take oft from one leg and most require that the skater take off backwards. The majority of exercises I see prescribed in plyometric programs for skaters have the athlete jumping forward from two legs.

Plyometrics can be an extremely valuable training method if used correctly. Unfortunately, too many strength coaches do not understand what this type of training is or how to properly prescribe these exercises. And the injuries and mediocre performance improvements that result from their incompetence has often led skaters and their coaches to become skeptical about the value of all oft-ice conditioning programs.

Just as Dorothy Hamill trained hard to become the greatest in her era, the champions of tomorrow have to train harder and use every resource to their advantage. The trick is, when using a resource like plyometrics, you have to know what you’re doing!

Kim Goss was the strength coach at the U.S. Air Force Academy for eight years and is certified by the National Strength and Conditioning Association and the American Council on Exercise. He has served as the Senior Editor at Dayton Writers Group.

We send out our lovely email newsletter with useful tips and techniques, recent articles and upcoming events. Thousands of readers have signed up already. Get a free WordPress eBook now.
just for parents, Plyometrics, training 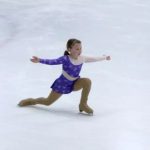 How to Register Your Figure Skater for Their First Official Test