What else can Alina Zagitova dream of now she’s turned 18?

On Monday, the reigning world and Olympic champion celebrated her 18th birthday, and received greetings and presents from all corners of the world. New programs & national team selection: Is Olympic champ Alina Zagitova set to end competitive skating exile? In contrast to many athletes, who are just taking […]

In contrast to many athletes, who are just taking their first steps in professional sport at her age, Zagitova has already scooped all the awards that exist in modern figure skating, winning European, Olympic and world titles.

She shot to fame at the age of 15, when she sensationally won the pre-Olympic European championship on her senior debut, beating none other than Russia’s biggest star, Evgenia Medvedeva…

In 2019, she was named athlete of the year by Glamour magazine in Russia, and was included in Forbes list as one of the highest-paid athletes, with an annual income of almost US$1 million.

Last year, the skater announced a break in her competitive career to concentrate on exhibition shows, where …

We send out our lovely email newsletter with useful tips and techniques, recent articles and upcoming events. Thousands of readers have signed up already. Get a free WordPress eBook now.
Alina Zagitova, Russa, Russia 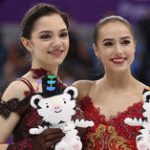 Evgenia Medvedeva could have hosted TV show with Alina Zagitova, but alas