With less than 500 days left until the opening of the Olympic and Paralympic Games Tokyo 2020, the United States Olympic Committee is enlisting Team USA athletes to meet some of the Japanese city’s young people, build bridges of friendship and spread the Olympic spirit.

And there’s no better ambassador than figure skater Jason Brown, whose admiration for the people of Japan grows stronger each year.

“They make each skater feel so special, so loved,” Brown said. “When they talk to you, it’s almost like they really know you. They know your programs, and they’re excited to see you skate, with the knowledge of what (elements) are coming up.”

Brown, a member of the U.S. figure skating team that won an Olympic bronze medal in 2014, is coming off a ninth-place finish at the 2019 World Figure Skating Championships, held last month in the Tokyo suburb of Saitama.

A sold-out crowd of nearly 20,000 spectators were on hand for the men’s event at the Saitama Super Arena, there to support not only the powerhouse Japanese team, led by two-time Olympic champion Yuzuru Hanyu, but international favorites including Brown and his teammates, Nathan Chen and Vincent Zhou, who brought home gold and bronze, respectively.

“Every event in Japan is sold out,” Brown said. “It’s really special skating there. Every time, it’s a new, incredible experience.”

We send out our lovely email newsletter with useful tips and techniques, recent articles and upcoming events. Thousands of readers have signed up already. Get a free WordPress eBook now.
Jason brown 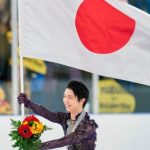