In order to qualify for the Grand Prix Final — after missing the event the past two seasons for varying reasons — two-time Olympic champion Yuzuru Hanyu needs to finish inside the top four at NHK Trophy, the sixth and last remaining Grand Prix series event. Hanyu competes on home ice in Japan this weekend, and the event is streaming live for NBC Sports Gold subscribers.

Hanyu trains in Toronto alongside American Jason Brown, who will also be competing in Japan. Brown clinches a spot in the Grand Prix Final if he earns a silver or better, but is also very likely in if he earns a bronze medal.

Reigning Olympic and world champion Alina Zagitova of Russia is in a similar situation this weekend at NHK Trophy, needing to finish on the podium to clinch a berth in the Final. She faces Moscow-based training partner Alena Kostornaia (who needs to finish fifth or better to make the Final) and Japan’s Rika Kihira (must earn a medal of any color), among others such as 2019 European champion Sofia Samodurova of Russia and 2017 U.S. national champion Karen Chen. 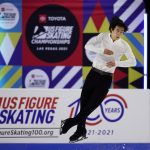