Gold was depressed, and her deteriorating relationship with food now involved binge-purge cycles. Her private struggles became immediately clear to Wagner, her rival, who said recently, “There was just no one home, and that was a scary thing to see.”

Wagner alerted a skating official that Gold seemed unwell and needed help. Sam Auxier, the president of U.S. Figure Skating at the time, said the association, which makes licensed psychologists and other specialists available to athletes dealing with mental health problems, had acted promptly. But attempts to assist Gold, he said, went nowhere.

“I don’t know if being more forceful with Gracie would have worked,” Auxier said, “just because she was in such denial.”

In retrospect, Gold said, she should have taken time off in 2016. But with another Olympics on the horizon, she tried to stay the course.

“You want people to see your pain so they see you need help,” Gold said, “but you don’t want to ask for help. So you live in this kind of terrible limbo.”

Gold’s facade crumbled entirely at another Colorado Springs monitoring session in the summer of 2017.

Out of shape after isolating herself in Michigan, Gold took the ice looking like the Grim Reaper, wearing a hoodie and carrying 50 extra pounds.

Her spins sputtered and her jumps, long considered spectacular, landed with a thud.

Perhaps worse than the weight gain was what she had lost. Gold’s … 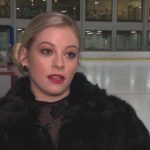 « 2019 U.S. Figure Skating Championship was a hit. Next up for Detroit Skating, Worlds?
At age 13, Skating Star Alysa Liu Could be the Dazzling Future of American Figure Skating »