In the nearly 100-year history of the Winter Olympiad, only three towns have hosted the Games multiple times.

Though it’s been 40 years since Lake Placid last brought the world’s winter athletes together in one place, the Adirondack town of fewer than 3,000 residents still carries the Olympic torch with pride (sometimes literally, like during an Opening Ceremony re-enactment that occurred on Valentine’s Day).

Around town, evidence of Lake Placid’s link to the Winter Games is everywhere, from the selections that top the shelves in the bookstore to the centrally located Olympic Center that played host to “The Miracle on Ice” in 1980 and has welcomed hockey fans and players for tournaments ever since.

And, of course, there are the Olympians themselves. 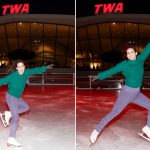 These are NYC’s Best Ice-skating rinks this winter