As she coped with the unwelcome end to her career as an Olympic figure skater, Kimmie Meissner wanted nothing to do with the sport that made her famous. A half-decade later, she goes to the rink almost every afternoon, drawn by the unfettered enthusiasm of the young skaters she …

After retiring in 2010, she stayed away from the ice for a few years until a friend persuaded her to perform in one of his shows. And during the 2014-15 season, she became a full-time member for the U.S. Stars on Ice tour.

“I didn’t even realize I was feeling that way for so long,” she said. “A big goal of mine was to get back on tour, and when that happened, I kind of realized, ‘Wow, I keep thinking this, and I don’t have any reason to. I’m going out and performing well and getting good feedback from the audience and my producers.’ Sometimes I’m the kind of person that always looks forward and I don’t let myself think about the past. Sometimes it’s nice to do that though and realize all of the things you’ve done.”

“That’s part of what made her so good,” said Gregory, who coaches at the University of Delaware Figure Skating Club. “She has such high expectations of herself and was never resting on her laurels. She had a pretty good run of it, but when it was happening, it was just constant pressure, and it was hard to stop and smell the roses and enjoy what you’ve done because the next thing keeps coming at you. But she lived the dream for figure skaters as far as accomplishments go.”

We send out our lovely email newsletter with useful tips and techniques, recent articles and upcoming events. Thousands of readers have signed up already. Get a free WordPress eBook now.
Kimmie Meissner, United States Figure Skating Hall of Fame 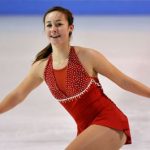 Kimmie Meissner, Davis & White to be inducted into U.S. Figure Skating Hall of Fame in January