Two-time defending Olympic champion Yuzuru Hanyu broke new ground to an old tune on Friday when he took the lead at the Four Continents Championship with a world record score in the men’s short program. Hanyu scored 111.82 points as he took to the ice to the accompaniment of […]

Japan’s Yuma Kagiyama marked his senior international debut with a career-best 91.61. The 16-year-old, whose father competed for Japan in figure skating at the 1992 and 1994 Winter Olympics, recently won the 2020 Winter Youth Olympics men’s championship.

In December, the younger Kagiyama was third at Japan’s national championships.

“My short program hasn’t been that good this year, so I went for broke. I’m glad I could skate a clean routine,” Kagiyama said. “I came in as an underdog, so I wasn’t nervous.” 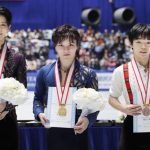 « Former Olympians teach ice skating to kids of families that faced prison
What is Ice Skating Queen Kim Yuna up to these days? »