Evgenia Medvedeva could have hosted TV show with Alina Zagitova, but alas

Just days after figure skating champion Alina Zagitova was announced as the new host of the popular TV show ‘Ice Age’ it was revealed that her famous counterpart was also offered a job on the same show, but didn’t take it.

The principle of sports school Sambo-70 Renat Lyaishev said that the two stars of figure skating could have co-hosted the TV show, regretting that they will not appear together on the screen.

“Yes, I knew that Alina will host the show. I wish she could have hosted it with Medvedeva, I know that she was suggested to be one of the presenters. It’s a pity that they will not work together. Their relationship could be more friendly and they could have co-hosted the program. Initially they were offered to work together,” Lyaishev said.

When asked why Medvedeva had turned down the offer Lyaishev said that “something simply went wrong” and the organizers decided to have just Zagitova as the host.

“She didn’t reject the offer to host the show with Zagitova. Just something went wrong,” he added…

We send out our lovely email newsletter with useful tips and techniques, recent articles and upcoming events. Thousands of readers have signed up already. Get a free WordPress eBook now.
Alina Zagitova, Evgenia Medvedeva 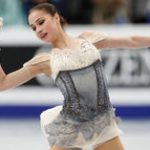 Is Alina Zagitova’s Career Over?