A Documentary about Synchronized Skating 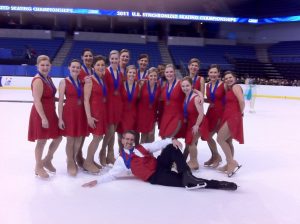 The female-dominated sport, in which teams of eight to 20 skaters perform formations and step sequences in-sync to music, is little-known to most people, the filmmakers said. When Pinaglia was doing research for the film, she could not find any previous documentaries or films based on synchronized skating.

We talked with both filmmakers about the documentary and the sport.

How did you get involved in the project?

Nicole: I have been a synchronized skater since I was nine years old. Angela and I met at American University and we were…

More here on the Documentary about Synchronized Skating:

We send out our lovely email newsletter with useful tips and techniques, recent articles and upcoming events. Thousands of readers have signed up already. Get a free WordPress eBook now.
Documentary about Synchronized Skating, Life in Synchro, synchronized skating, video